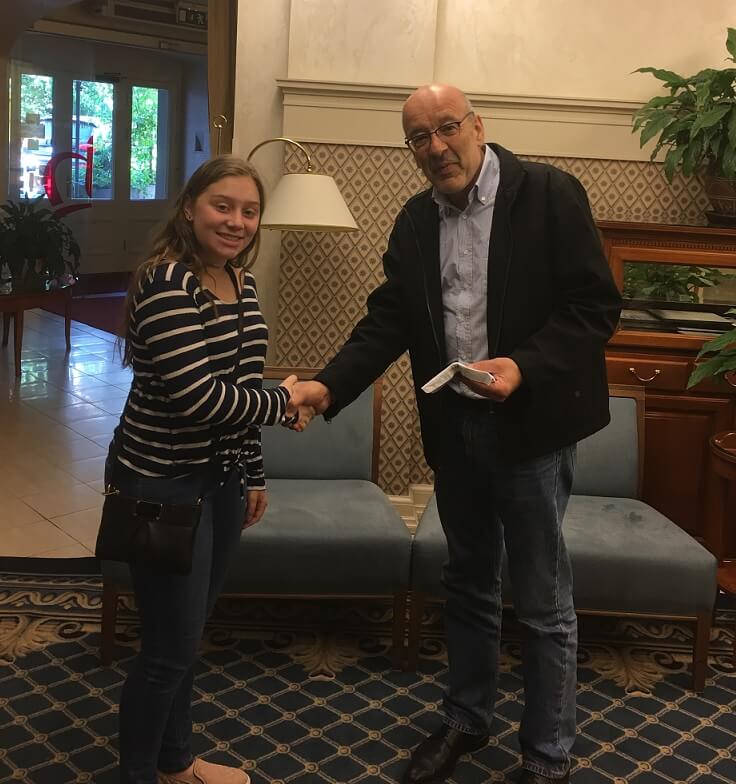 American Jewish teenagers – Sasha Mayer and Emma Friedman – donated 1,000 EUR to the Riga S. Dubnov Jewish Secondary School. In this way, the girls want to support their Jewish peers of Latvia and their right for prayer and Jewish learning.

A while ago, the Kotlechkov family lived in Riga before immigrating to the United States in 1979. Back then, Karina Kotlechkova (now Mayer), who studied at the 40th High School and Riga J. Medina Music School, was 13. Even during the Soviet period, Karina’s grandparents quietly kept Jewish traditions and values, instilling a sense of Jewish identity and pride.  When Karina went with her grandfather to the Peitav Shul on high holidays, they never entered through the main door.

In the United States, Karina was amazed by religious freedom: people could freely sing Jewish holiday songs, light candles, openly visit the synagogue and receive Jewish education. Consequently, Karina spent time to promote Jewish learning, married in a synagogue, under a chuppah and has built a Jewish home.

Many years later, Karina shared her childhood memories with her husband David and their children – Ari and Alexandra (Sasha). Last June, Sasha had her Bat Mitzvah. In her solemn speech, she spoke about the centuries of injustices toward the Jewish people. She could not believe that even recently in the land of her parents and in many other countries of the world, Jews were unable to freely  visit synagogues and observe the traditions. The girl is grateful for the freedom and safety that she is experiencing as a Jew in her country and school – Hewlett East Rockaway  Jewish Centre – that has taught her today’s values. She believes that Jewish education and the freedom of religion should be available to everybody. The words of Sasha encouraged her friend Emma Friedman, and she also decided to make a donation. In order to support Jewish children in Latvia – ensure their safe place for Jewish education – the girls decided to make a donation to the Riga S. Dubnov Jewish Secondary School.

The Representatives of the Riga Jewish Community and the Riga S. Dubnov Jewish Secondary School are touched by this deed and very grateful to Sasha and Emma.