On 27 January at 12:00 a commemorative event will be held in Riga at the Bikernieki Forest Memorial, marking the International Holocaust Remembrance Day.

Bikernieki is the biggest killing site and mass grave of Nazi victims in Latvia. Between 1941 and 1944, 20 000 Jews from Latvia, Austria, Germany and Czechoslovakia, 5 000 Nazis’ political adversaries, and 10 000 Soviet war prisoners, were killed here.

The ceremony will feature prayers by the representatives of major religious denominations in Latvia commemorating together people of different faiths who were killed during the Nazi occupation in Bikernieki forest. 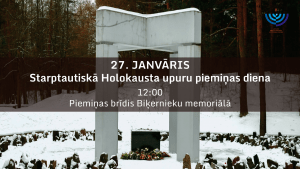