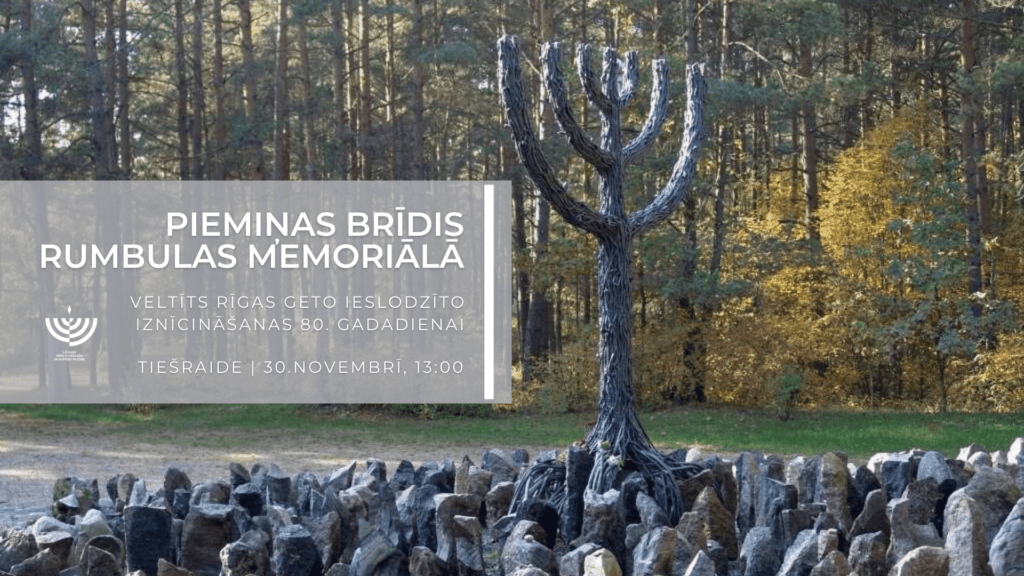 On November 30 at 13:00 the Commemorative event dedicated to the 80th anniversary of the massacre of the Riga ghetto prisoners will take place at the Rumbula memorial. It will be attended by senior state officials, foreign officials, representatives of the diplomatic corps, the Riga municipality and the Jewish community.

Council of Jewish communities of Latvia invites you to participate in this commemorative event online on the Latvian TV4 channel or on the FB page of the Jewish community.

Rumbula is one of the largest sites of mass extermination of Jews in Europe. During two actions on November 30 and December 8, 1941, the Nazis and their local supporters shot in the Rumbula forest more than 25,000 prisoners of the Riga ghetto, as well as about a thousand Jews deported from Germany.
For the establishment of the Riga ghetto, the Nazi occupation authorities allocated territory in the Maskavas suburb, where by the end of October 1941 about 30,000 jews had been housed. Guards were posted around the ghetto, the ghetto inmates were completely isolated from the rest of Riga inhabitants and employed in forced labor. At the end of November, a selection was made, selecting about 4.5 thousand Jews recognized as able-bodied – mostly young men. The remaining ghetto prisoners, including more than 5,000 children, were shot in the Rumbula forest.

On November 30, from 18 to 21, candles will be lit at the Freedom Monument in memory of the Jews killed in Rumbula.